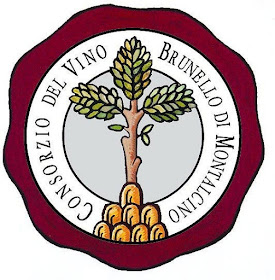 This week, the Consorzio Brunello di Montalcino and dozens of producers descended upon New York City to showcase the first public tastings of their recent Brunello vintage release, 2011.  As usual, TuscanVines was front and center covering the event.

While the majority of the event was devoted to a large walk around tasting,  we attended an exclusive early morning seminar that spotlighted selected 2011 Brunello and also some wonderful 2010 Brunello Riserva.  This article covers only the "Breakfast Seminar".   Comprehensive coverage of the walk around tasting will be forthcoming.

Any vintage that followed the perfect 2010 was bound to have the cards stacked against it.  However, 2011 - ranked a 4 star vintage by the Consorzio - portrays itself admirably.

The vintage started with a moderate winter with cold but not unbearable temperatures and moderate amounts of rain and snow.  An earlier than normal start to Spring was very warm and rainy and seemed to allow for early vegetative growth and flowering.  June was very nice but once July arrived, the heat spiked severely and it remained hot throughout the end of August.   Temperatures moderated by harvest time, but overall, the grapes were harvested earlier throughout the zone.  Generally, the vintage is considered similar to 2003 and 2009.  Some producers described the overall climatic conditions as "similar to 2010, but more extreme".  Producers with vineyards at higher elevations fared slightly better than producers with lower lying vineyards in warmer areas.  Yields and production levels were down and some producers refused to bottle 2011 Brunello at all.

Carpineto's vineyards lie 2 kilometers west of Montalcino Centro and proprietor Antonio, who presented the wine called the vintage "a roller-coaster".  Carpineto produces about 18,000 bottles of Brunello from 24 acres of vines that sit at 1,476 feet above sea level.

The 2011 is a medium ruby with slight brick coloring at the rim.  I love the nose!  Warm, ripe cherry fruit with chestnut and roasted coffee notes.  Ripe, lower acid palate with flavors that follow the nose. Moderate tannin structure make this approachable and enjoyable now.  Really nice effort from this producer.  89-91 points.  SRP = $60

Owned by Frescobaldi, this 375 acre estate is one of the largest with vineyards in the southern portion of the zone.  Almost 240,000 bottles are produced.

The 2011 did not impress me.  The wine is a bright ruby and very shy on the nose with an aqualine character.  Tart raspberry flavors with ripe savory notes dominate the palate but this is very ripe and overdone to my tastes.  Moderate acids and tannins, I don't see this aging well.  Drink now,  87-89 points.  SRP = $70

Collosorbo is owned by the Sardo family who farm 66 acres of vineyards located at 1,150 feet above sea level near Castelnuovo del'Abate.  I was so impressed with this wine that I spent considerable time later in the day chatting with proprietor Lucia Sardo to compliment her and taste the rest of their wines.

The 2011 is a deep ruby color through to the rim.  The nose is replete with fresh flowers, pine, spices and wild berries.  Flavors follow the nose with lots of elegance and delicious long, juicy sensations.  Lots of finesse here and maybe one of the best wines tasted that day.  91-94 points.  SRP = $50

San Giorgio farms just 25 acres of Brunello and has vineyards from 1,150-1,480 feet above sea level. About 20,000 bottles are produced  and the vineyards are rich with chalk and loam that lend a lot of character to the wines in the way of mouthwatering salinity.

The 2011 is impressive.  Medium ruby with a slightly lighter rim, I just love the nose.  Flowery, powdery, perfumed and minerally - it's unique.  Ripe cherries with high toned structure and refreshing acidity.  Really attractive on the palate and fairly tannic but balanced.  Later on notes of mint and eucalyptus appeared on the nose as well.  I love this.  91-94 points  SRP = $60

This is the sister vineyard of Andrea Cortonesi - owner of the esteemed Uccelliera.  With production around 6,600 bottles,  this is smaller than Uccelliera but the quality is there.  The 2010 Voliero was one of the best values of the vintage.

The 2011 is very ripe.  Deep ruby, among the darkest colored wines on the day, the wine is rich and ripe on the nose and palate with red plums, spices and mineral notes.  Low acid, full bodied and rich, this is more brawn than elegance.  Not a favorite to my palate, but I think lovers of new world wines will dig this.  About 87-89 points.  SRP = $54

This is a single vineyard Brunello that sits at 880 meters above sea level on Castello Banfi's estate in the southern part of the zone.  This is a wine that Banfi makes in only exceptional vintages; thus, since 1985 the wine has only been made 11 times.

This is deep ruby in the glass with only a slight fade to brick at the edge of the bowl.  A bit shy on the nose initially, the aromas blossomed considerably with more air time.  Huge berry and cherry aromas and flavors dominate with sweet pipe tobacco, spices and chestnut joining in.  Lots of structure, lots of acid, lots of tannins.  Elegance and power combined, this will cellar and develop well for a decade or more.  Lots of fennel emerges on the finish. Love it!  97-100 points.  SRP = $125

This is from a one - 1 - acre vineyard that sits just over 1,090 feet above sea level.  Winemaker Giacomo Bartolommei hit this one out of the park.  Deep ruby with barely any lightening.  Roasted espresso, fennel, spice and cherry aromas and flavors dominate this young wine.  Flowers too - this is all there.  Fruit - acid - tannins - superb.  96-99 points.  SRP = $100

Podere Le Ripi is owned by Francesco Illy and the 29 acres sit at 997 feet above sea level.  The estate is organic and biodynamically farmed and produces above 5,000 bottles of this Riserva.  Winemaker Nasello Sebastian presented the wine even though he has only worked for Podere Le Ripi since 2014.

The 2010 Riserva is really delicious.  Super dark ruby in color with no fade at all.  Opaque.  Absolutely delicious with ripe fruit, tobacco leaf, spice, flowers and mushrooms on the nose and palate.  Complex already.  Salinity comes through on the finish from the limestone soil and makes your mouth water.  Love this.  95-98 points.  SRP = Not Given.


There were really no surprises tasting the 2010 Riservas.  The biggest compliment I can provide in general is that the expectations were sky high for these wines and yet they still achieved extensive praise.  During the course of the event I tasted many other 2010 Riservas that were equally impressive and likely contained several other 100 point wines.  If you can afford them, they are wines to cherish for decades and given the excellence of the vintage, they can be enjoyed in their youth as well.